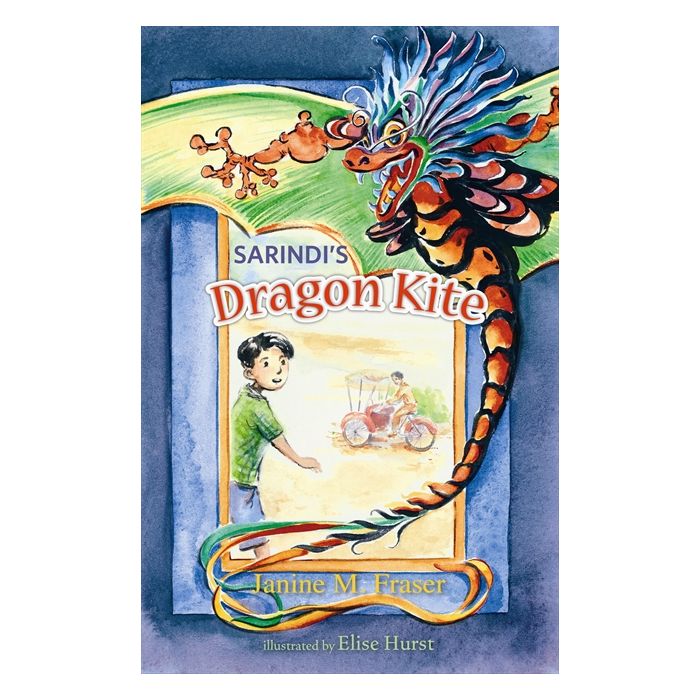 Sarindi’s Dragon Kite, was shortlisted for the Western Australian Premiers' Book Award, 2010. It was published in September 2010 by HarperCollins.

The Sarindi books can be used by teachers to educate children about life in Indonesia.

In Sarindi’s Dragon Kite, it’s Sarindi’s birthday and he thinks he is the luckiest boy in the world when he wakes up to see at the end of his bed the multi-coloured Dragon Kite he wants more than anything else in the world. But later that day Sarindi wonders if luck has deserted them all. An earthquake has flattened the nearby town of Bantul, where Sardini’s cousins live. Have they survived the earthquake? And will it ever be time again to fly his beautiful kite?

In Sarindi and the Lucky Buddha (2009), Sarindi’s mother suddenly becomes ill. And when his mother is not getting well, he decides to visit every sacred place he knows, and prays for his mother's good health at each - because who knows which will turn her sickness away?

"Here is a lovely story, imbued with warmth and understanding. It is simply told and enhanced by Elise Hurst's delicate pencil drawings at each opening. It provides a moving picture of a loving family who, although they lack the possessions of our consumer society (taking his mother to the hospital could use all their savings), feel rich because they have each other."
~ Jo Goodman, MAGPIES, September 2009

Sarindi thinks that luck is like a mischievous monkey, playing hide-and-seek, and it seems to be hiding from Sarindi and his family. When Sarindi’s father has an accident and loses his job as a becak driver, he says they must go to the bird market and buy a Lucky Bird. Then perhaps their luck will change. So does the magical song of the Lucky Bird change their luck? ... Or do they make their own luck in the end?

In 1995, Angus & Robertson (HarperCollins) published Fair Go, a skinny book about a boy who enters a school beauty contest in order to win the prize, a set of superb coloured pencils. So he won’t be laughed at, he convinces the other boys to support him in the name of “equal opportunity”! In 1996 HarperCollins published Abdullah’s Butterfly, a beautifully written short novel introducing children to the cultural/family environment of a young boy who lives in an Asian rainforest area. Sally Mcinerney in The Sydney Morning Herald noted: “a charming story ... gently illustrated by (Kim) Gamble’s pictures.” Abdullah has been sold to the Spanish, Japanese and Korean markets.

Janine is also an award winning poet, who has been published widely in journals in Australia, and in America. Her poems have appeared in Antipodes, A North American Journal of Australian Literature. Her book Portraits in a Glasshouse was published by Five Islands Press, Series 10 New Poets.