"Barry Hill’s collection of essays from the last four decades is commanding and impressive. Few could match his range of subjects: from Tagore to John Berger, Lucian Freud to Christina Stead – all, for the most part, carried off with aplomb."

His most recent prose work, Peacemongers, was published by University of Queensland Press in October 2014. A combination of a travel book, a history book, and a ‘peace book’, this is Barry’s first major prose work since 2002.

Barry Hill's Broken Song: TGH Strehlow and Aboriginal Possession , first published in 2002, is the seminal love story of the Centre of Australia - a tale of cultural and personal heartbreak, of obsession and possession with regard to the past and the future. This story of Ted Strehlow has been described as 'one of the great Australian books.' A complex, brilliant man in three languages (German, English, Aranda), a lover of women and 'his' Aboriginal country, he grew up on the Hermannsburg Mission at a time of bloody frontier settlement. He devoted his life to collecting the secret sacred songs and the sacred objects (which held the ancestor spirits of the songs). Like no one else in Australian history he could claim such inside knowledge as to declare himself 'the last of the Aranda'. Yet having done so much to win trust, he was to betray it in our modern period. Broken Song won numerous prestigious prizes, including Premier's Awards (Vic 2003, NSW 2004), the National Biography Award 2004 and the Tasmania Pacific Bicentenary History Prize 2004; and it's been proudly kept in print by its publishers, Penguin Random House (link: https://www.penguin.com.au/books/broken-song-9781740512299 ) as a classic. 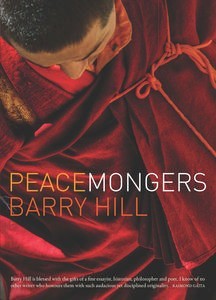 This odyssey begins with a pilgrimage to Bodhi Gaya in India and ends after he reaches Nagasaki, Japan, in the aftermath of its atomic bomb. His travelling is imbued with the life and ideas of Indian Nobel Prize winner, Rabindranath Tagore, along with those of MK Gandhi.

‘Peacemongers is not only a compelling literary quest, but a book of ethics for the coming times.’ ~Justin Clemens

‘Barry Hill is blessed with the gifts of a fine essayist, historian, philosopher and poet. I know of no other writer who honours them with such audacious yet disciplined originality.’ ~Raimond Gaita

‘It’s an amazing tour de force – a huge amount of research in a text full of magical insights. The whole book has given me much to think about, and it's particularly timely given the alarming tensions in East Asia at the moment.’ ~Tess Morris-Suzuki

‘It is a book that I wanted to re-read immediately … to enjoy again the depth and quality of Hill’s thoughts and writing.’ ~Books Publishing 5-Star Review