Robyn Bavati has taught dance and English and worked as a shiatsu therapist. She is an award winning fiction and short-story writer who grew up in Melbourne and as an adult has lived in both Australia and Israel. She is the author of four novels.

Her latest book, A Weekend with Oscar, was published by Walker books in July 2021. Sixteen-year-old Jamie lives with his mother and younger brother Oscar, who has Down syndrome. Though Jamie is still grieving the death of his father, life starts to look up when he meets Zara, the new girl at school. When their mother goes away for the weekend, Jamie volunteers to look after Oscar. But when the weekend is over and their mother doesn't return, Jamie faces the toughest challenge of his life.

"This is a moving story with many twists and turns. Each character and location is vividly created. Jamie is a sympathetic character, kind and compassionate, very easy for readers to warm to. Oscar is totally believable, not a sugar coated version of someone with a disability.

A Weekend with Oscar is an important, powerful YA novel. Highly recommended."
~ Pauline Hosking, Magpies, Vol. 36, Issue No.4, September 2021.

Within These Walls won the Older Readers category of the WA Young Readers' Book Award 2018, and was short listed in the Younger Readers Category of the 2017 CBCA Book of the Year Awards.

Based on true events, this work of historical fiction is for 11 to 14 year olds.

"Within These Walls is constrained in its visual detail and emotion, dealing with the observable events and reactive responses of those under threat without graphic elaboration. This in no way lessens the impact of the story; indeed it brings a deeper understanding of the pragmatism that Miri must adopt to survive within her shifting world ...

"It seems inappropriate somehow to say Within These Walls was an enjoyable read, but I learned so much of the history of Warsaw without feeling bogged down in facts and figures. As Miri's life changed, so did my understanding of the escalating terror that the Jewish people of Warsaw ... lived with during Nazi occupation in World War II."
~JENNIFER MORS, Reading Time - see the full review here.

"This book would make an excellent ... companion to Anne Frank's Diary of a Young Girl or John Boyne's Boy in The Striped Pyjamas as it reads in an accessible contemporary YA way despite its graphic historical content."
~EVIE MARSHALL, Magpies Magazine

Robyn's second novel Pirouette was published by Penguin Books in Australia and Flux (now North Star) in the USA. In Pirouette, fifteen-year-old identical twins, Simone and Hannah, meet for the first time at a summer dance school. Simone is being trained as a dancer, but she hates performing. Hannah loves nothing more than dance, but her adoptive parents see it as just a hobby. When the girls pirouette into each other's lives, they decide to swap places. But for how long can they keep pretending? What will happen when the truth is revealed? 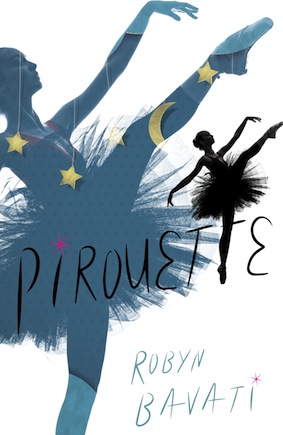 "(Pirouette) … speaks both to young dancers who can relate to Hannah's sheer joy for ballet and her endless energy to practice and perform, as well as to those who will understand Simone's jaded attitude, due to her professional training and the accompanying pressure. Even readers less personally invested in dance can appreciate Bavati's treatment of newly discovered sisterhood and the twins' Parent Trap–like scheme. The author takes several potent fantasies—to dance professionally, to have a new sibling, and to swap lives with someone else for a while—and plays up the tension all three create through the escalating complications in her protagonists' lives. Ages 12–up."
~ Publishers Weekly

Dancing in the Dark, Robyn's debut novel, was also published by Penguin Books (Australia) and Flux (USA). In 2011, it was short listed in the YABBA (Victoria) and KOALA (NSW) Childrens' Choice Book Awards Shortlists for years 7 to 9. Dancing in the Dark also won a silver medal in the 2014 Sydney Taylor Book Awards in the USA.

Ditty, a girl from an ultra-orthodox Jewish home develops a passion for dance. But when her parents won't let her take ballet lessons, she starts to dance in secret. This dramatic and moving story is about a girl who follows her dream, and finds herself questioning everything she believes in. This is contemporary Chaim Potok.

"What if the very thing you were passionate about were forbidden by your family? This is the conundrum that Ditty Cohen has to face ... Forced to keep her dancing lessons a secret from her disapproving family, she begins to wonder which is more important: passion or faith. Ditty's inspiring story ... is an insightful look into the hardships that some young people must endure to find themselves, even at the risk of leaving everything they know behind. The theme of making sacrifices in order to pursue a dream is a universal one. An excellent debut novel."
~ KIMBERLY CASTLE-ALBERTS, Hudson Library & Historical Society

Robyn is a wonderful presenter for schools (years 7 to 10). See our Speakers section for rates.

For more information about Robyn and her books, go to Robyn’s web site at www.robynbavati.com.

Heather Nimmo's Grasping at Shadows: Balfour the mining town in the Tarkine was published by the Circular Head Historical Society through Forty South. Heather was interviewed on Sunday 21 November by ABC Tasmania.

Robyn Bavati's latest YA novel, A Weekend with Oscar was published by Walker Books in July 2021.